A woman from Nanaimo was issued an immediate roadside prohibition (IRP) after blowing a fail, even though it more than 2 hours after she last drove. Lee Lowrie had been at a pub in Maple Ridge and had consumed a drink and some appetizers with her boyfriend before going to her sister’s house, where she arrived at 3:40pm. Planning on spending the afternoon and the night at her sisters, Lowrie had a few more drinks once there. Lowrie then received a call from the RCMP at 5:30pm, stating they had received an anonymous complaint that she had consumed multiple alcoholic beverages before driving away from the restaurant at 4:53pm. Lowrie gave the police her sister’s address, and 5 police officers arrived at 6pm with an alcohol screening device, asking her to blow. After explaining that her last alcoholic beverage had been consumed just 2 minutes earlier, the officers delayed the test by 15 minutes. Lowrie then did the test, and blew a fail. In addition to the $500 fine, Lowrie would also have to pay $930 for a responsible driving program, as well as $250 to reinstate her licence. Her truck was also impounded for 30 days, with her licence revoked for 90 days. 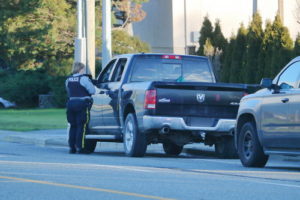 Lowrie was represented by Jennifer Teryn, an associate of Steele Law Corporation (formerly Jeremy Carr & Associates) who practices criminal and constitutional law. Having conducted more than 300 reviews of immediate roadside prohibitions, Teryn said that the police had no legal authority to make Lowrie blow into the screening device. Teryn, along with Jerry Steele, the managing partner of Steele Law Corp., have been fighting the changes to Canada’s impaired driving laws that came into effect in December. These changes allow police the power to demand a breath sample from any driver they lawfully stop, as well as the power to demand a test within two hours of a driver being on the road, even if someone has arrived home and consumed alcohol.

Teryn was successful in having Lowrie’s IRP revoked. The mandatory screening demand was used inappropriately, with the officers believing they were lawfully entitled in their actions, Teryn attested.